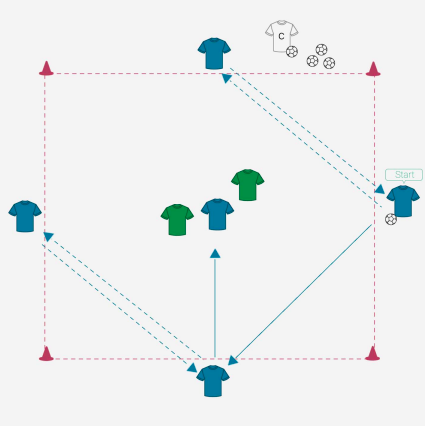 A rondo is a possessional game where the goal for the team in possession is in numerical advantage and are trying to keep the ball away from a set of defenders. The game is often played in tight spaces and with pace. The legend Johan Cruyff implemented this game in his time as a coach at FC Barcelona. He said about rondos:

"Everything that goes on in a match, except shooting, you can do in a rondo. The competitive aspect, fighting to make space, what to do when in possession and what to do when you haven’t got the ball, how to play ‘one touch’ soccer, how to counteract the tight marking and how to win the ball back."

Here is coachbetter's selection of the best rondo drills to work with your team. Enjoy!

Rondo in a diamond with transition:

In this training activity, there is a team of four keeping the possession of the ball against two defenders and a neutral player. The particularity of this training activity is that the position are fixed even for the defending team and the neutral player. They have an area where they can defend. Once the defending team recovers the ball, they can try to finish on one of the four mini goals. The team that lost the ball try to re-press and win the ball back. Great drill to work on many aspect of football with an amazing intensity.

Quick Decisions Rondos in a 3v1:

Who said that rondos had to be with fixed position? Here is a very intensive and cognitive drill to work with your team. Start in a 3v1 rondo and complete a set of passes before going to the next square. The person that passed to the next square and the defender move there + another player from another square. It requires a lot of thinking and a lot of technical ability. Start with one ball and with unlimited touches for your players to get comfortable with the exercise.

In this drill, there are two teams competing against each other. The numbers can be changed but the goal is to keep the possession in one square, complete an amount of passes (5-6 passes ideally) before changing the point of possession to another square. The goal is to for the team to go from one square to the other without the other team gaining the possession of it. Don't change the teams after every loss of possessions but count how many times the team defending wins the ball, to implement a competition as well.

Rondo with Double Responsibility in a 4x4v1

Amazing training activity where the coach will set up four square. There are four teams as well. All the players are in fixed positions and will stay in the same positions for a fixed amount of time. In each square, there is a 3v1+1 with the white player that must be aware and can play with two different squares. It works on technical ability, awareness, checking one's shoulders and communication between players.

Here is the most classical form of rondo. A square, four players in possession and two defending. However, the addition of the player in the middle adds a difficulty for the two players defending. Indeed, they have to cut passes on the outside but also in the inside. It is very important that the player in the middle finds good angles and have a great body shape at every moment. The repetition of this drill can bring a lot to your players!Let us know in the comments if you have a favorite rondo drill and visit us at coachbetter.com