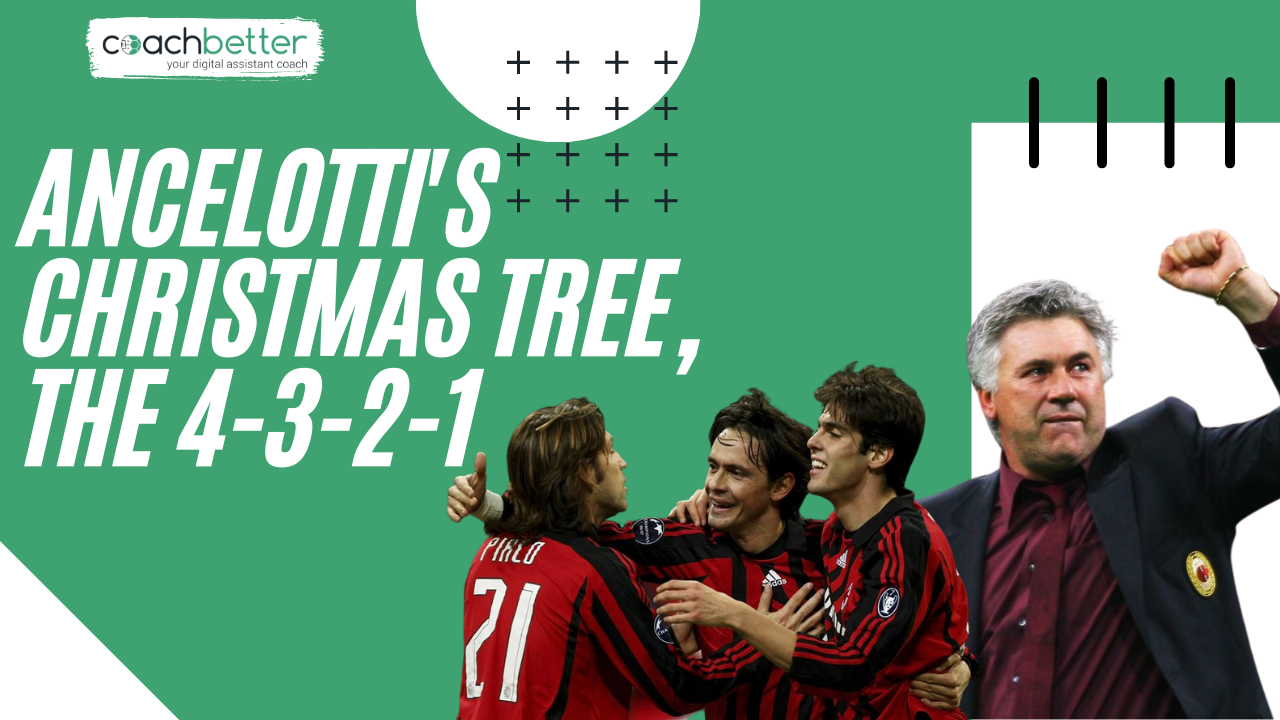 Defensive Compactness through the 4-3-2-1 System

The 4-3-2-1 formation, also known as the “Christmas tree,” provides maximum compactness in the center of the pitch and is used by teams that want to force their opponents to play on the wings. It also allows teams that are tactically flexible to change their formation quickly. This formation, however, demands extremely capable individual players and is therefore rarely used in both offense and defense.

4-3-2-1 is based on extreme compactness in the center, although it is to the detriment of wing play and even more so than, a 4-4-2 diamond formation. The back four cover the width of the pitch, but the further forward you go, the narrower the formation gets.

The objective in 4-3-2-1 is to prevent the opposing team from being able to play through the center and force them to move to the (less attractive) wide positions. You can often see teams that defend deep in their own half (defensive pressing) using this kind of formation.

If you focus actively on gaining the ball, then it’s about coordination of the fullbacks with the three defensive midfielders (in the half-spaces or on the wing).

Further opportunities for pressing arise as a result of setting “pressing traps” for the opponent, which means purposefully leaving spaces open in the center for opposing players, who can then be attacked from all sides (central and defensive midfielders together).

The compact center allows a team to easily gain numerical superiority near the ball, if the opponent plays through the center.

Even if you’re not actively focused on gaining the ball, this system of play allows for blocking the opponent’s passing lanes and thereby prevents the opposing players from entering the penalty area. This kind of “passive” defense could be seen in many Italian teams of the 1990s and 2000s that – with a lot of disciple and little effort – were able to weaken their opponents.

Although, against teams with extremely strong players on the wing, this formation does not make sense from a defensive point of view.

The defensive compactness of this formation is a big weakness when it comes to the offense, especially on the wings, due to fullbacks having to cover extremely long distances in order to achieve the necessary width.

If a fullback supports the offense, it can create open spaces out wide, as the rather center-oriented tactic can cause the opposing team to concentrate its defense in the center. The important thing in this case is a fullback’s timing, as moving in too soon could cause him/her to be covered immediately.

Otherwise, playing through the center is a great option as a team can dominate in the offense with five midfielders.

If the defensive midfielders advance, it creates excellent counter-pressing possibilities throughout the entire pitch, that can also be interpreted as offensive tactical variations. The deep-lying playmaker (see below) plays an important role in this case by receiving the ball from the defense and ensuring the link between the attacking midfielders and offense.

Nevertheless, the focus in the offense generally remains on fast transitions after gaining possession.

The coordination and running paths of the attacking midfielders in tandem with the striker are especially important in order to be able to do this.

If you have players who are good in one-on-one situations and creative in offense, it can consistently create chances when the opponent is high up the pitch.

A team that used and perfected this system of play was AC Milan under Carlo Ancelotti, who was lucky and skilled enough to find the perfect player for each position in 4-3-2-1.

Andrea Pirlo was the deep-lying playmaker just in front of the defenders and played elegantly with incredible ball control and unbelievable passing skills in all areas of the pitch. He was flanked by the two holding midfielders Gennaro Gattuso and Massimo Ambrosini, who were also comfortable with possession but perhaps praised more for their roles as ball winners.

In front of this incredibly strong defensive midfield line of three were the incredibly talented Brazilian Kaka and the Dutchman Clarence Seedorf, both of whom were capable of surprising the opponent in its own half through neat flashes of skill or the intelligent use of space. Kaka and Seedorf understood how to use transition play perfectly, together with strikers Filippo Inzaghi or Ronaldo, by creating incredibly dangerous counter-attacks at high speed.

Another reason this system of play worked well in Milan was because of the fullback Cafu, who was an incredibly strong runner and able to play the entire length of the field. He created a great deal of stability in the defense and could simultaneously play on the wing offensively, which subsequently gave the offense the width it needed.

The 4-3-2-1 can be put to good use when the objective is to control midfield through the defense. It’s incredibly hard for an opponent to get through against five central midfielders if all of the players are in their positions.

The strong focus on the center can become a weakness when playing against a team with strong wingers, as the coverage on the wing is systematically neglected with just one player each. For this kind of opposition, a formation that is broader and stronger on the wings is much better suited (for example a 4-4-2 with a flat back four).

In general, the 4-3-2-1 formation only makes sense if you have fullbacks who are strong enough in running and tackling. The three offensive players must be able to run long distances as well, in order to open up and use free spaces on the pitch.

If you want to have a player in the position of attacking midfielder (playmaker) in certain situations such as this, it’s a good option to replace the second central midfielder with a striker, which results in a 4-3-1-2 formation. The playmaker then has a lot of freedom in the offense, since there are seven defensively minded players.

If the team moves closer together in terms of depth and the two attacking midfielders join the row of three defensive midfielders, it creates a 4-5-1 formation. This creates a wider line-up, but it then sacrifices the staggered depth of before.

In certain situations, it could be worth considering a 4-3-2-1 defense with a switch to a 4-2-3-1 offense. This is possible, by having one of the defensive midfielders play on the wing and one of the offensive midfielders on the other. This asymmetrical interpretation of the basic formation provides more width when attacking.

The 4-3-2-1 formation is especially suited for developing defensive behavior in the center of midfield when playing against teams with dangerous players in this area of the pitch. This requires training the team’s defense in the center, as well as training fullbacks to defend higher up the pitch (including how the other players should react when a player leaves his/her position in the back four).

The interaction of the defenders with the three defensive midfielders can be trained very easily. You can pay attention to whether they are able to block the opponent’s passing lanes to their striker(s) (passive defense) and, if not, how effectively they are able to put pressure on the players in possession (doubling-up in the center).

Within this set-up, you can practice and train opening/closing passing lanes quickly after gaining/losing possession.

In general, this formation works well for training a team’s defensive pressing or positioning deep down the pitch, the latter of which means preventing finishes and dangerous combination play, without actively trying to win the ball (unlike pressing). This requires focused and coordinated shifting of the entire formation.

If you want to work on certain positional categories, you can focus on your fullbacks’ runs and attacks. In doing so, you develop their timing when inoffensive positions and also the balance between defensive and offensive requirements.