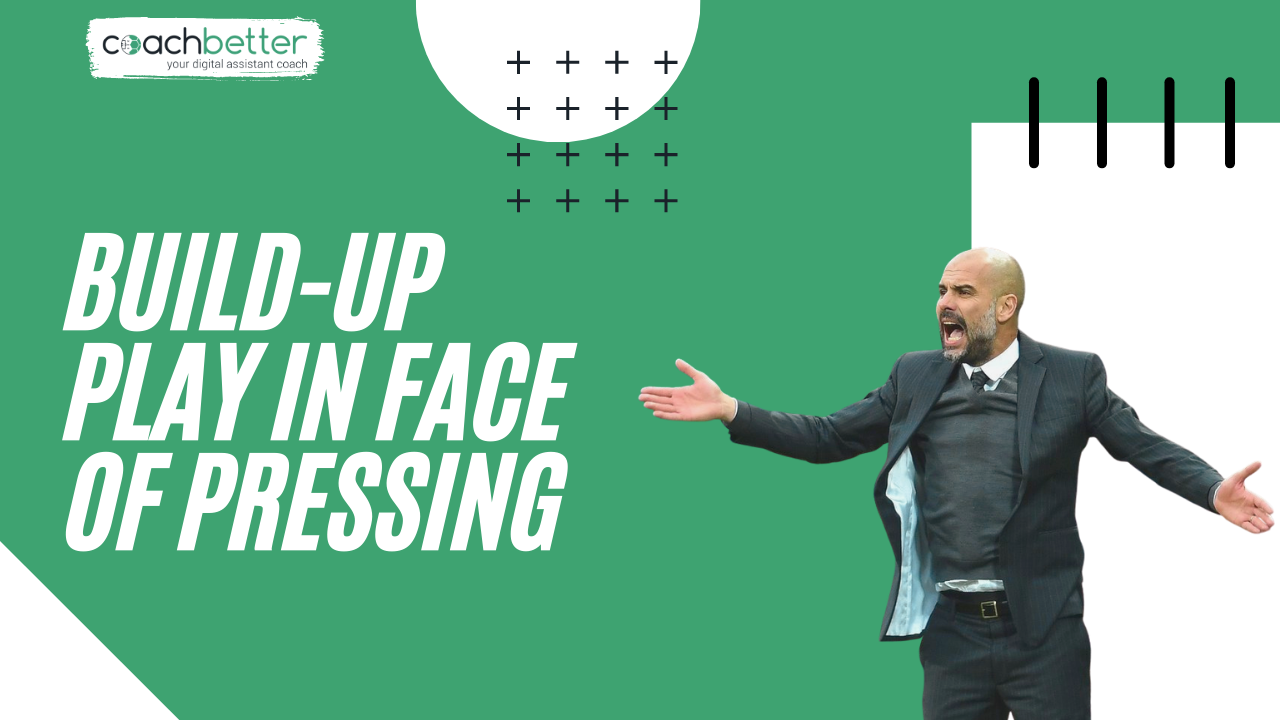 Football Tactics: Build-up Play in the Face of Pressing

In order to hold your own against an opponent’s pressing in midfield– at least against teams that are roughly on the same level as yours, you need as much information as possible about the opponent’s preferred pressing variations.

Does the opposing team press in midfield? In which spaces does the opponent attack depending on the situation of the match? Based on careful study of the opposing team you can make a match plan and develop effective counter-measures. This requires time and patience but can be worth it – especially in such a crucial match.

In order to limit the opponent’s options going forward, it’s helpful to stagger the team as widely and deeply as possible without losing connections between different parts of the team.

This means the opponent has long running paths in order to then press successfully. Because of this, the team should avoid playing into tight situations.

The passing game therefore shouldn’t consist of just short passes, but rather – where possible – be over at least mid-range distances (which happens almost automatically when the team is staggered widely).

To do this, formations with four rows are advantageous, for example the 4-2-3-1 or the 4-1-4-1 system. Less staggered formations, like the 4-4-2 with a flat back four, are unfavorable in this case, because there are fewer options available in the game. It’s beneficial to place players who can resist pressing in the center of midfield if possible.

If the opponent attacks very early on and high up the pitch you should let the players run long distances at first, something that requires involving the goalkeeper in build-up play.

The rest of the team can then fan out and constantly provide openings (even deep in one’s own half) for the player in possession. The players receiving passes must stay calm with the ball when in high pressure situations, in order to let the opponents wear themselves out from running.

If you let some of your players play higher up the field in the opposing half, it then increases the risk of a dangerous counter-attack for the opponent, if their pressing efforts are unsuccessful. If the opposing team is able to prevent your successful combination play while building up from the back, you can resort to long passes, that can be controlled or passed on by one’s own offense.

This forces the opponent to make long, exhausting runs down the pitch every time, something that will expend high amounts of energy across the duration of the match

Tactical possibilities against pressing in midfield

Pressing in midfield can also be out-maneuvered easily with long passes. It’s unlikely, though that successful combination play will come of it, which is why it’s better to try to prevent the opponent’s typical pressing pattern.

If the opposing team often presses directly against the right fullback (pressing victim), you can avoid passing to that player. Another possible reaction to this tactic is to have a player who is especially technically skilled play in this position as an element of surprise.

If the opponent’s pressing formation isn’t compact enough and gaps are created, these should be used to play past an opposing line and get one’s own offensive players moving towards the opposing goal. This creates scoring opportunities and forces the opposing team to adjust the players’ behavior when attacking, once this system has failed on numerous occasions.

Wingers as a surprise effect:

A typical play is a direct pass from a central defender to the offensive midfielder who has moved in from the wing, for example in a 4-2-3-1 formation. If this player gets to the ball in time, he/she can switch the ball to the central midfielders, who can then pick up the pace and head towards the goal.

Another possibility for combating pressing in midfield is for the central midfielder to drop deep into the tight pocket of space between a central defender and fullback.

If an opposing midfielder advances and leaves his/her line, a gap is created that can be used for build-up play through the center. If this player stays in his/her position, though, the central midfielder has secure possession of the ball and the situation will unlikely end up in pressing.

One variation that is often used, is playing into a relatively tight situation on the wing. This lures the opponent into attacking. If the opposing players then subsequently attack, you can switch play through the central midfielder or with a direct pass to the central defender furthest from the ball.

Ideally, the central defender is then able to pass not only to his/her fullback, but also to the wide midfielders or wingers positioned in front of them, who can then begin to dribble further up the field. Since the opponent is still on the other side of the pitch after a switch in play, your team has more room in which to make key decisions.

Flexibility and technical quality are key in order to get past opposing pressing situations, it’s primarily about not getting stuck in the same patterns of build-up play, as it becomes too easy for the opponent to anticipate. This requires technically good players, who have a feel for space and are able to use small gaps to their advantage. At a team-tactical level, simple measures such as position changes or rotating players can render the opponent’s pressing efforts ineffective.

Training different variations of build-up play that are effective against opposing pressing is about training the flexibility of one’s own team. Using a sparring team that plays with as many variations of pressing as possible, your own team can learn what kind of behavior is helpful when trying to play through pressing.

It’s difficult to use the identical pressing patterns as the opposing team in training, but spaces in which the opponent presses and in which direction they try to steer the game, can be simulated quite easily. Otherwise, you always have the option of showing your team videos of the opposing team and working on passing and running paths accordingly, in order to then prepare your players for the opponent.

All small-sided games that require fast decisions under a lot of pressure from the opponent, train the necessary skills of your players and by doing so indirectly increase the chances of success against opposing pressing.”