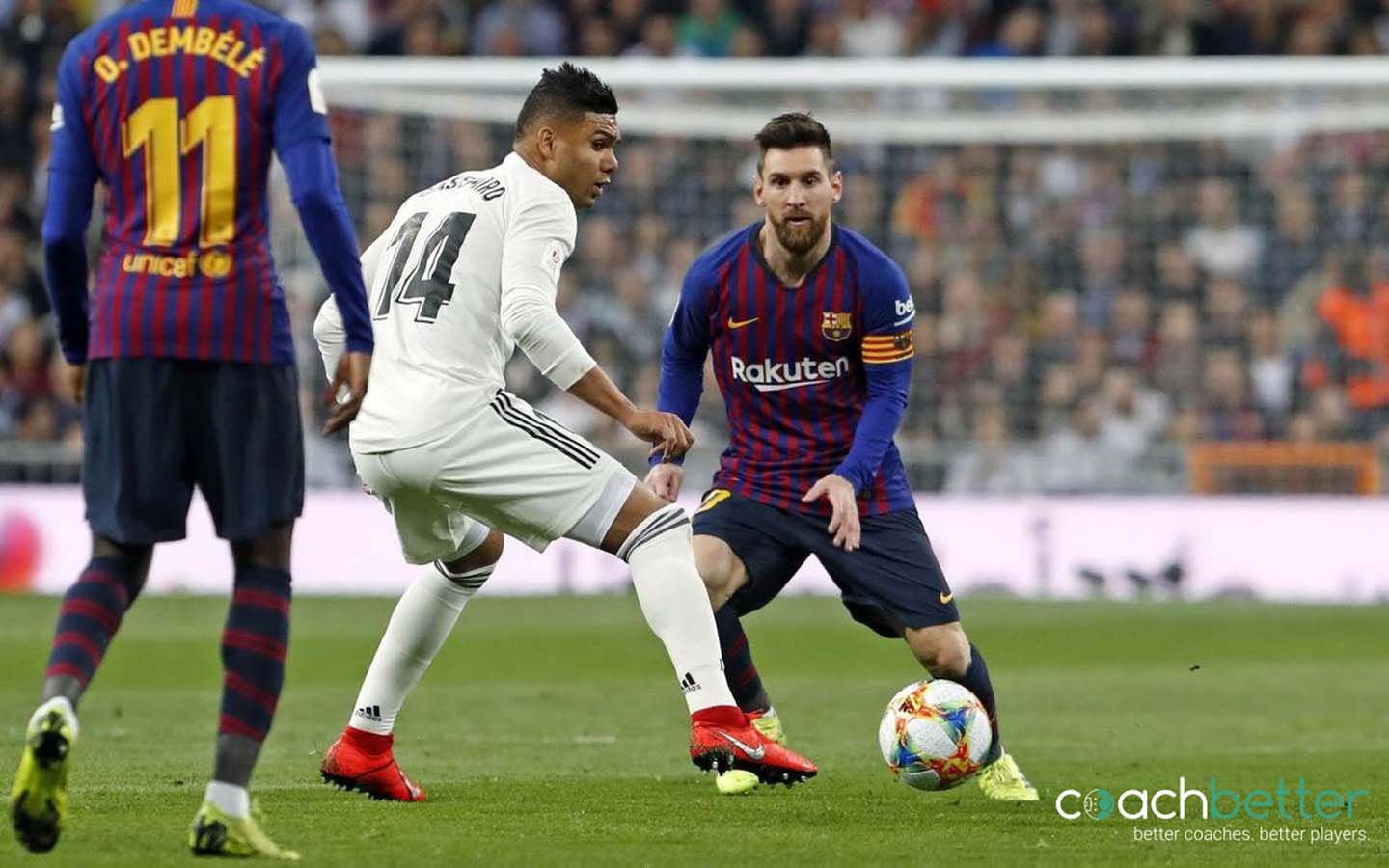 The 4-1-4-1 formation is a system of play that puts a strong emphasis on a secure defense without completely neglecting offensive principles. This system of play thrives on individual strengths. If you have the right players, it can be used as a solid basic formation out of which individual qualities can be used for an even greater advantage. If you are looking for more articles about formation and shaping, go to coachbetter.com and start reading!

Stay up to date
Signup for free

Similar to the 4-4-2 with a flat back four (with an additional line of four in midfield), this formation is strengthened by its staggering depth of four rows, in addition to the wings being patrolled with both wingers and fullbacks. The weak area of this formation is the central offense with just one striker. The midfield, however, is compact, as the only true defensive midfielder can support both when building up from the back (midfield four) and as extra coverage in the defense (back four). A strong midfield will allow you to control the game in possession and be strong on the defensive side as well.

In 4-1-4-1 it’s easy to initiate direct pressing towards the opposing center backs when the midfield four advances forward as a compact unit. The players in the center then leave this formation and attack the opposing defenders directly. The sole striker halts lateral passes from the defenders, which essentially takes the second center back (assuming a back four) out of the game. In the game West Bromwich Albion vs Leeds for the Premier League, we saw exactly that. Bielsa, using his 4-1-4-1 formation, lets Rodrigo Moreno jump out of the midfield line to press with Bamford. This forced the mistake and resulted in the 1-0 for Leeds United.

In general, it’s possible to attack high up the pitch (offensive pressing) since there is extra coverage through the defensive midfielder. It’s also possible to use “classic” pressing to steer the game towards the center. A gain of the ball in the center is then possible through the defensive midfielder and the two other central midfielders. Double-teaming on the wings with wingers and fullbacks can also be used to good effect (e.g. when the opponent is building up from central defenders towards the wing). The requirement for doing so is that the players on the wing are within proximity of each other. Through the compact advancement of the midfield four in the offense, the team is in a great basic position for aggressive counter-pressing. Indeed, there are always enough players near the ball to attack immediately if the opponent gains possession. This was one of the objectives of Joachim Löw, who regularly uses this system with the German national team. A system that led them to victory in the 2014 FIFA World Cup. One that sees Germany playing dominantly and transitioning into counter-pressing as soon as the ball is lost.

Building up from the back in 4-1-4-1 can be done in several ways. If the central defensive midfielder drops deep between the center backs, they can then shift to the wings. The fullbacks shift higher up along the touchline (at least on the side nearest to the ball). If at the same time the central midfielders stay around the center (at least one of them), the wingers can play between positions and by doing so use the space between the points of intersection of the opposing wingers and players in the center (e.g. with a 4-2-3-1). Overloading a wing is an easy way to create a situational minority for the opponent through the positioning of additional players on one side. It is wonderfully done on the fifth goal by Leeds, the winger comes inside and finishes.

If the right midfielder moves to the wing, for example, and the fullback on that side advances too, there are three players against two opponents. The opponent then has the challenge of trying to react quickly enough. If individual players leave the line of four in midfield, they can attack in the spaces behind the opposing defense and thereby support any offensive runs without taking too big a risk.

A position that plays a very central role in this system of play is the defensive midfielder. He/she must advance far enough with the offense to enable recapturing possession quickly, but at the same time never leave the defense exposed.This requires a great amount of intelligence and a good overview of the game, as well as great one-on-one and leadership skills. The defensive midfielder is pivotal to a defensive mindset in midfield.When it comes to the orientation towards the defense, he/she must be able to operate well and possibly alternate with the midfielder in front of him/her. By switching positions, gaps will be then created in the opposition’s midfield. At Bayern Munich, for example, Javi Martinez operates in this role when the team plays with a 4-1-4-1.

Another player with an important role in this formation is the one and only striker. He/she must be agile enough and able to hang on to the ball when under pressure. In addition, this player should generally be good in the air and more importantly great at finishing. Jamie Vardy would be a great striker to play in 4-1-4-1, selfless, strong, fast, and a good finisher.

Both positions must be occupied by strong players for this system of play to be used effectively. Additionally, at least one of the central midfielders should be able to play high up the pitch and be dangerous in front of the goal. Otherwise, you run the risk of thinking and playing too defensively.

If you want to have a strong defensive setup and be protected from dangerous counterattacks, the 4-1-4-1 formation is a good choice.

With fullbacks and wide midfielders operating on the wings, they make sure that there is stability when advancing up the pitch, as well as from a defensive point of view (similar to the 4-4-2 with a flat-four).

The relative balance of this formation can be turned into a weakness, though, if a coach can’t manage to set a focus (offense/defense, wing/center). The sole striker also should have enough quality and should move intelligently so that he/she isn’t left isolated in attack.

A 4-1-3-1-1 formation can also make sense: a player leaves the line in the offensive midfield and uses the space between the lines. He/she can then, together with the central striker, create dangerous situations in the center (attacking midfielder or deep-lying forward).

Defensively, you can drop easily in a 4-5-1 with the midfielders getting into a compact shape.

Get our App for free

Stay up to date
Signup for free

Practice the 4-1-4-1 and its features building your own set of drills in coachbetter.

When training the defense of a 4-1-4-1 formation, you should pay special attention to the interaction of the players in central midfield.

The three midfielders in the center, led by the defensive midfielder, must prevent passes to the opposing striker(s), which means pressing constantly when the opponent has possession.

In addition, different situations must be considered for pressing offensively or in midfield: who initiates the situations? How does the defense move as a cluster to one side or forward?

What especially matters here are the coordinated forward runs of the players and that they can recognize certain situations in a match. The central defensive midfielder can only operate effectively when the rest of the team is disciplined and contributes.

Because of the previously mentioned tendency to focus on the defense in this formation, it’s essential to work on the combination play from the basic formation in the offense: which players are supporting the front striker? How is the passing triangle between the wingers and players between positions working?

Another important aspect of the offense in 4-1-4-1 is the vertical plays towards a team’s central striker.

If the players in the defensive midfield can pass to the front and the offensive midfielders advance accordingly, there is a chance of building a dangerous attack in the opponent’s half.

To do so, though, these movements must be automatic, so that players are free to make important decisions during a match.

Just like 4-4-2, you can use this system to train wing play. When doing so, well-timed interaction of the wingers and the fullbacks are crucial.

Depending on the players, you could use switch play on the wing, which you can practice in training, or the winger can free up space on the wing for the fullback.

With any of the tactics within this system of play, you must pay attention to the individual skills of your players, to then be able to use them advantageously.

This means looking at their speed and passing ability in certain situations, as they can create a certain tactical asymmetry in this relatively balanced system, which subsequently creates an unexpected challenge for the opponent.Look at these beautiful goals scored going wide, to the wingers and then looking centrally to finish.

If you too, want your digital assistant coach, go to coachbetter.com and sign-up for free. Unlock the best coach in yourself and start planning your sessions.

Stay up to date
Signup for free
Are You Ready?