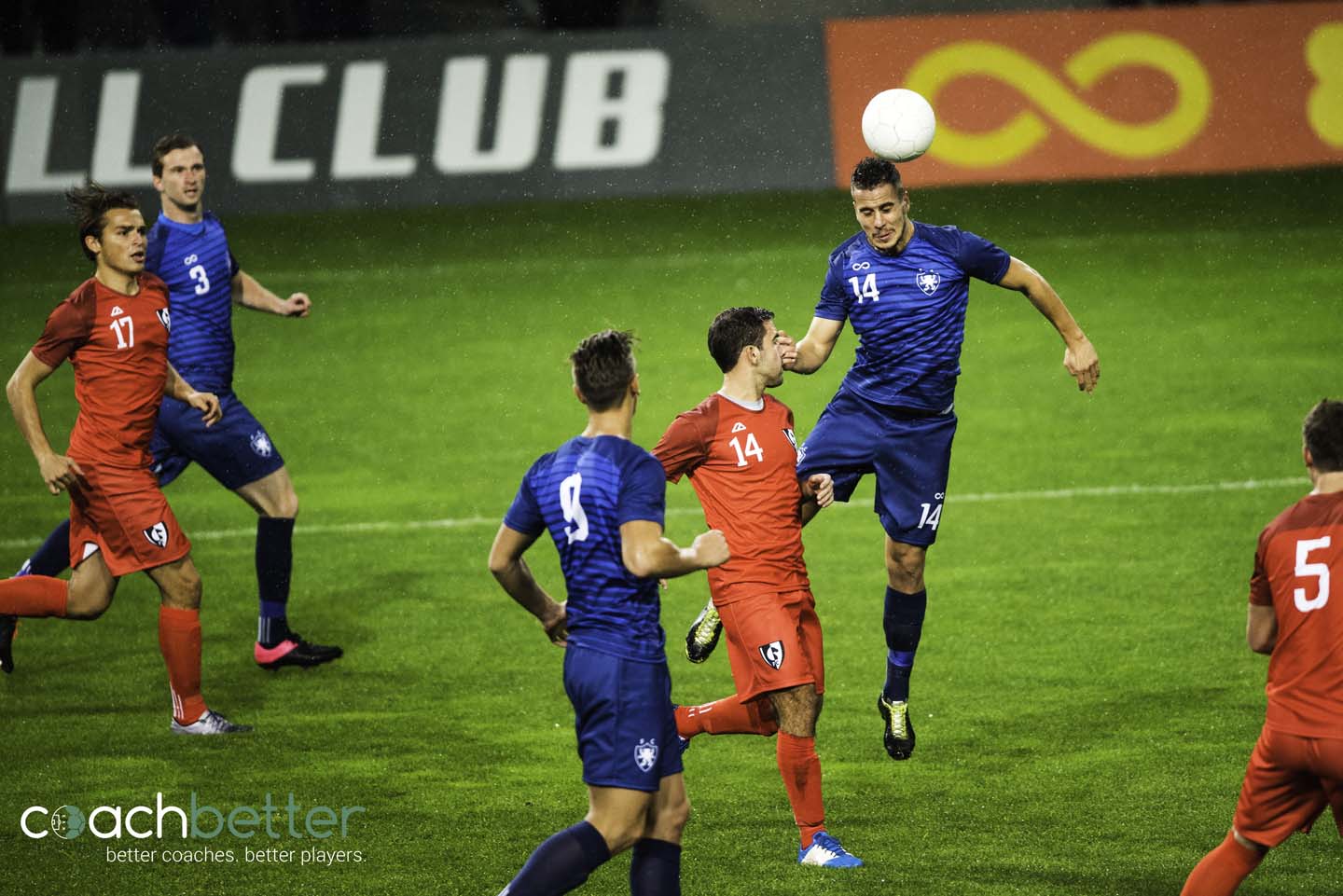 How to defend in football? Behavior of the back four

A back four is a variation of a defensive setup with two central defenders and two fullbacks. The quartet often moves as a unit, even though the players rarely play at the same level on the pitch. A general recommendation can be made for the distance between individual players throughout the back four and the space between defense and midfield, that being 40-50 feet from the front and the sides. The “correct” distances depend on several factors. We can look at the speed of the players and the characteristics of the opponent’s game.

If the opponent manages to gain space further down the pitch, the back four usually drops back. They do it with the rest of the team in order not to leave space uncovered behind them. In the case of back passes, or when the opponent is generally under pressure, the line progresses further up the pitch (possibly asymmetrically) with the constant objective of keeping the team together in a compact formation and restricting space for the opponent (ball-oriented shifting). If the opponent plays toward one side without moving forward (lateral pass), the defensive line usually also shifts toward the wing without moving forward.

Shifting to the wing/crescent formation and “L” (lateral axis)

When shifting towards one side of the pitch, the defense constricts the space on that side, for example when the opponent plays toward the wing (whether in the defense, midfield, or offense). The fullback nearest to the ball moves to the wing to attack, i.e. to cover the space on the touchline. The other three in the back line must also adjust their positions to minimize the distances created. If they don’t, the opponent is then given the opportunity to create deep forward passes through the gaps. When this is done, the back line is staggered slightly in width and depth, which creates the shape of a slightly curved crescent. This way the players in the back four can offer protection to their fellow team members.

Besides the crescent formation, in which the player furthest away from the ball is found in the deepest position on the pitch, an “L formation” is often used. In this formation the central defender furthest from the ball (the third player in the line) takes up a deeper on-field position. On the other hand, the fullback further from the ball plays somewhat higher up the field. The reason for this is that it means there is less danger of the offside trap being sprung by an opposition attacker. This is due to the defense not being in the correct positions. While the central defender further from the ball also has a better overview of the situation, since he/she is then closer.

Advancing and falling back (longitudinal axis)

If a team manages to put its opponent under pressure and forces a back pass, the whole team, including the back four, advances towards the ball. As soon as the opponent can get out of this situation, the whole team must drop back into its position. This also applies when a deep forward pass is likely. The players in the back line then drop back quite a few feet as a precaution measure. If the ball doesn’t make it that far, they can still make forward attacks.

The players in the back four usually stick to their positions quite strictly. This means that if the opposing players change their positions, the defense must “hand over” the opponent to a teammate. The defenders give each other commands that make it clear who is responsible for an opposing player and how he/she is moving (for example: “you!” or “behind you!” or “coming!”). As soon as a player in the back four leaves his/her position, passing opportunities and vital on-field space is then presented to the opponents.Embed from Getty Images

Moving out of the back line

If one of the players in the back four follows a directly opposing player into midfield, the other players in the line must react quickly. If a player leaves the line, it creates a gap that must be closed as quickly as possible. In order to do so, the remaining three players move in closer together and form, at least for the time being, a line of three. This requires a great amount of attentiveness and coordination between the players.

If a central defender is involved in a 1v1 situation or an aerial duel, the other defenders must form a defensive triangle. To do so, they advance diagonally toward the center to avoid presenting deep passing lanes to the opposition or letting the ball “slip through” and an opponent subsequently latching onto it. In order to be able to do this, the players in the back four must communicate with each other constantly. Only with clear directions from their teammates can each player always know what he/she should be doing, i.e. whether he/she should attack or fall back.

The role of a goalkeeper with a back line

Goalkeepers have a particularly important role when it comes to how the back four sets itself up. The keeper must play relatively far away from the goal in order to be able to pick up important passes from the defenders. In doing so, the keeper plays as somewhat of a “libero,” or sweeper. The first keeper known for playing this way in Germany was Jens Lehmann. Because of his greater ability to interact with the rest of the defense. Thanks to his experience, Lehmann was even preferred over Oliver Kahn in the 2006 World Cup in Germany. Recently, it is very well done by current international goalkeeper Manuel Neuer.Embed from Getty Images

A back four is the most vulnerable when the opponent is free to run up on the players. This happens when the midfielders are outplayed and puts the defenders directly under pressure. When this happens, the players can’t defend effectively even if they’re doing everything right. This just goes to show that a back four can only function well with direct interaction with the (defensive) midfield. It’s therefore the responsibility of the midfielders to prevent direct pressure being put on the back four. It is also his task to prohibit the opposing strikers from making direct passes, especially in the central section of the pitch. If the strikers still manage to receive passes, midfielders must immediately fall back and attack with the defenders (double-teaming) in order to win the ball back. The central defenders then defend 1v1 and try to prevent a direct breakthrough.

Training/learning how to function as a back four

As basic training for a back four, it’s ideal to begin with 2 v. 2 situations, i.e. “defending in twos”. This teaches the players to coach and communicate each other as they learn the correct distances and appropriate timing. Once the players have perfected this behavior, you can add additional players and train 3 v. 3 including defensive triangles. In 3 v. 3 you can also work on the basic situation for using a crescent formation (ball on the wing). Eventually you can train the behavior and interaction of the entire back four. This means training in a match-corresponding space (width of the pitch and positioning) and with at least 5 v. 5 (back four with one midfielder). Indeed, playing with a back four only makes sense when the defenders interact with the defensive midfielder. If you want to improve the entire defensive game in training, you should use game of 8 v. 8 or 11 v. 11."