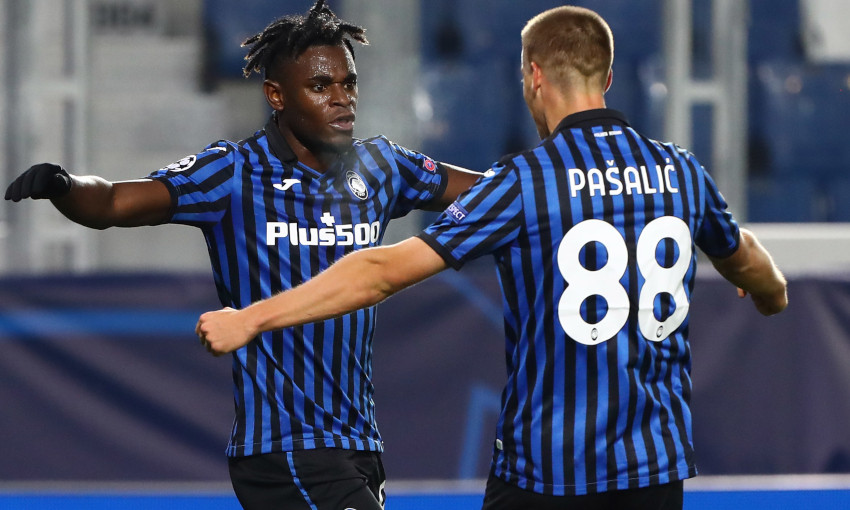 The 3-4-3 system of play is used by teams who want to play fast, offensive soccer. For example, the national teams of Chile and Barcelona use this system frequently and more recently teams like AS Roma, Atalanta, and even Chelsea FC who have been using this system. Depending on the interpretation of the formation, it can be used effectively for both possession and transitional play. Analysis by coachbetter!Embed from Getty Images

The 3-4-3 formation has a strong focus on the front line (three strikers) and midfield (most common shape: diamond). The diamond formation enables control of the midfield, although because of the way the midfield four is setup, it sacrifices wide play and puts extra emphasis on advancing fullbacks.

This system of play is well suited to aggressive pressing (pressing in the attacking third or in midfield). The three strikers can put pressure directly on the opposing defense by attacking and creating one-on-one situations (man-to-man marking). They can do so by attacking in the center or out wide.Like the 4-3-3 formation, the 3-4-3 is a great option for pressing in midfield and steering the opposition towards the center, which with four players there can often lead to gaining possession. This requires isolating the opposing fullbacks and blocking off the ability to pass the ball out wide. This can be pictured amazingly by recent Atalanta victory over Napoli 4-2 in Serie A. In the third goal, Luis Muriel is able to gain possession high up on the pitch to attack the last line and score a beautiful goal.

Often the opposing team has no other option than to attempt a forward pass, which halts any opportunity to build-up from defensive positions. If the opponent makes short passes to the center, the winger furthest from the ball can also offer additional support.If the midfielders advance close behind the strikers, you can use effective counter-pressing since you have numerical equality or even advantage, which means attacking the opposing team immediately after they have gained the ball and before they are able to build up in a controlled manner. The players must be careful in this case not to let the opponent play out wide, which is the most vulnerable area, due to the amount of people found centrally.

Typical plays in the offense

Barcelona takes a high risk while building up from the back by spreading out the back three to cover the entire width of the field. However, this offsets the normally limited width in this system of play.Attacking in midfield is heavily reliant on play in the center when using 3-4-3, often combining fast, variable and short passes together. With two defensive midfielder in front of the defenders, two players out wide (who also play between positions), and inverted wingers, this formation allows for passing triangles in the offensive third of the pitch.

You can see in Chelsea's victory over Atlético Madrid how they use the inverted wingers to bring danger to the opponent's back line.If you have technically strong and tactically savvy individual players, this is a great way to effectively use possession play. This was the case in Barcelona in the 2017/2018 season with Sergio Busquets (def. midfielder), Andres Iniesta (L), Sergi Roberto (R), and Ivan Rakitić (att. Midfielder).Embed from Getty ImagesThese midfielders then try to get the ball to the individually strong strikers at the right moment, who then try to play out wide by creating one-on-one situations using their incredible speed and technical perfection when dribbling.A special tactical variation while attacking, which can also be used well in 3-4-3, is playing with a so-called “false 9,” in which the center striker (traditionally the #9) doesn’t play at the furthest point of attack, but instead operates frequently out of midfield. This has two effects: the striker evades coverage of an opposing central defender, and simultaneously increases the (already present) dominance in midfield.

The 3-4-3 operates as a very offensive system of play because of the effectiveness and scoring ability of the strikers. The wide players, however, are isolated as they don’t have fullbacks behind them for support.This requires players who are strong to have extraordinary technical skills, be able to control the ball at high speed, and able to win tackles in tight spaces, - these full backs must also be unbelievably fit as they have to cover a lot of distance during the match.Embed from Getty ImagesThe biggest danger here is losing possession in this very attack-minded formation. Through the lack of security in defense, every loss of the ball in midfield could lead to the opposition scoring a goal.Therefore, the objective is to get the ball into the attacking third as fast as possible (and away from one’s own goal), in order to then get in position for implementing a high pressing scenario.The back three must be made up of players who are stable in defense but are also able to build up effectively from the back.A great example of this kind of player is Felipe. The Atlético de Madrid star is a versatile and attack-minded defender, who is very dangerous in set piece situations. When playing against a team which has a lack of height, this can be an important factor that could even go on to decide a match. Additionally, Felipe incredible passing skills enable his teammates in midfield to get into great positions and potential scoring opportunities.Embed from Getty Images

With the right individual players, it’s possible to create scoring opportunities effectively through the players out wide. This is especially the case if they’re assisted by midfielders who remain open by playing between positions. Nonetheless, the importance of the wide players’ talents cannot be underestimated.Here is a goal scored by Roma this week-end against Fiorentina where Karsdorp, the outside back, delivers a beautiful assist on the winning goal.

It is important to note that if one outside back is as high as Karsdrop was on this action, it is important that the other one balances on the other side to have balance in case of counter-attack.The diamond formation in midfield most likely provides the best option for numerical advantages and optimal staggering in the center. This 1-2-1 can only work if players are able to use tight spaces in order to then create space of their own between opposing defensive and midfield lines.It’s equally helpful to occupy these tight spaces to take advantage of the space between opposing players out wide and in the center when the distance between them can sometimes be too far in certain situations.The 3-4-3 system of play is only advisable if you want to play all-out attack. It requires strong individual players and also a large amount of dependence on them, in order to implement this particular system.If the opposing team manages to prevent dominance in midfield through effective pressing, this formation turns into a distinct weakness. The work of the defense is challenging, especially when you are not able to stop the opponent from advancing in wide positions.

Variations: the 3-4-3 with a line of four in midfield

Like a 3-4-3, it differs due to the fact that it is a formation with a line of four in midfield. In this variation, which can sometimes be used to ensure the result of a match, the rows operate similarly to a 4-4-2 with a line of four in midfield.This line of four in midfield provides better coverage on the wings in the defense. However, a real 4-4-2 might be a better option for even more stability in the defense. On the other hand, you could also, just like Atlético Madrid in Champions league, defend in 3-6-1 formation which is obviously not advised.In this respect, the 3-4-3 with a diamond formation in midfield is a rare system of play, which for this very reason makes it interesting to both coach and see it in operation. However, it is also a formation that has huge demands on the quality of the squad.

The 3-4-3 encourages training possession play in the center of midfield.The cooperation of the diamond formation with different possibilities for distributing space and position changes, provide several starting points for group and individual tactical work in training.In addition, training the front line is important, focusing both on the play out wide as well as in the center. Here is a drill to help you train the inverted wingers in situation of 1v1.

A third useful focus can be using 3-4-3 as a basic formation to then develop and practice formations and procedures for counter-pressing.At first, pay attention to the positioning of players near the ball (basic formation) and you can then train triggers and procedures for counter-pressing. A typical trigger, for example, is when an opponent can’t make a forward play because he/she is facing his/her own goal."Playing 3-5-2 is quite hyped nowadays but people forget about how useful can be the 3-4-3 alternative. Here are all the examples of how you can bring much success to your team playing that way. If you have the right player, don't hesitate one more minute!