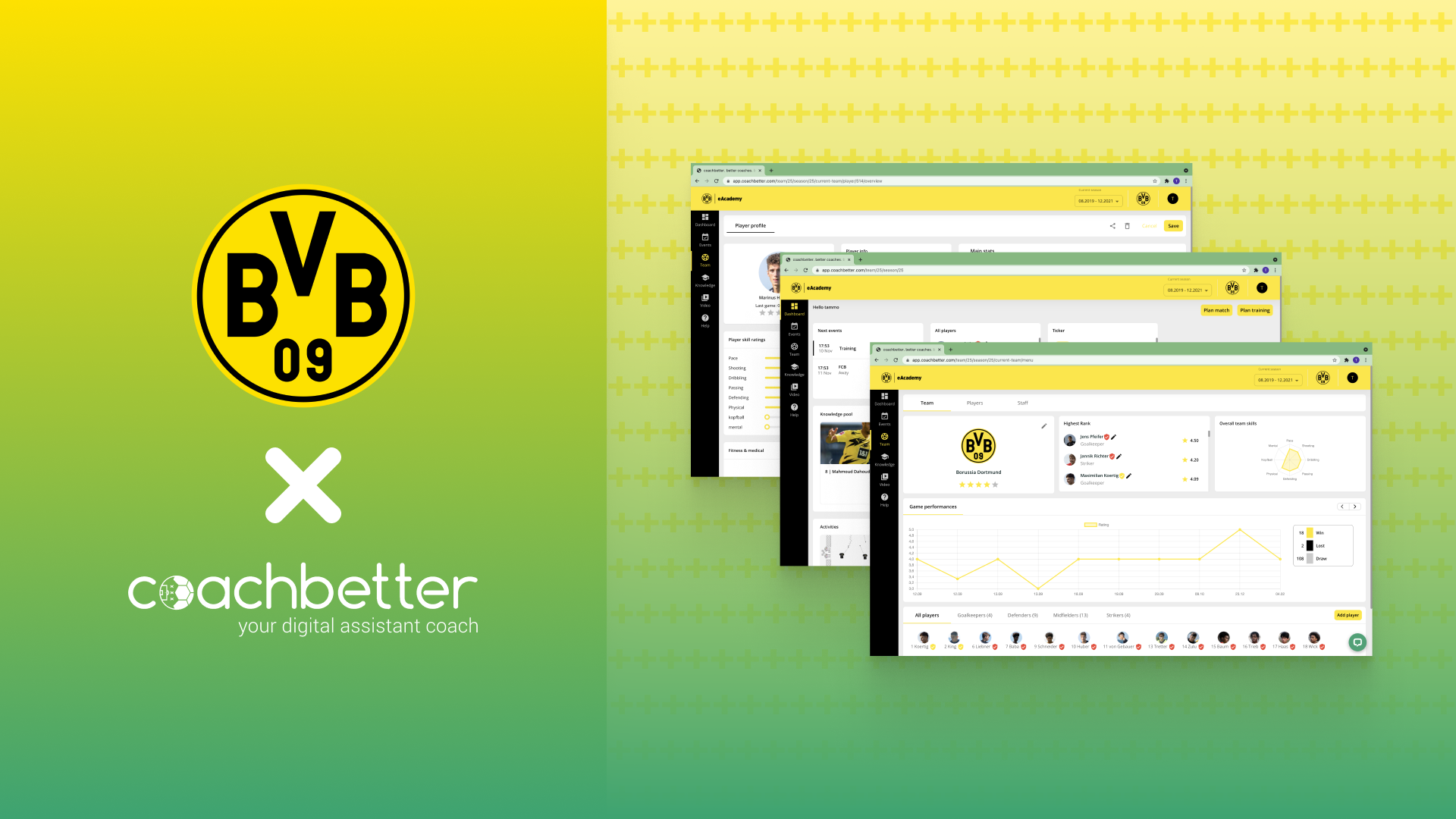 ‍Dortmund / Zurich, 19 April 2022 – The eight-time Bundesliga champion Borussia Dortmund and the Swiss-German start-up coachbetter have agreed on an exciting, long-term cooperation. With its eAcademy, BVB is now benefiting from the know-how from the young company's app and platform. Coachbetter is a coaching platform for coaches, clubs and associations that want to revolutionize the digital soccer world.

The digital partnership with the BVB Evonik Football Academy creates a platform for digital coaching and further education of coaches at partner clubs in 16 countries. These include the BVB International Academies in Texas, Washington and Florida in the USA, Japan and the Academy in Poland managed by club legend Lukasz Piszczek. The reason for the joint project is the endeavor to digitize coaching education with e-learning formats at the highest level and to make it as sustainable and environmentally friendly as possible.

The key to the success ofour academy and the partner clubs are our coaches. Due to Covid-19, we wereforced to switch to digital solutions faster than planned. By working with coachbetter and creating the BVB eAcademy, we want to ensure the best possible education and development for our coaches with the BVB philosophy.

Co-Founder and CEO of coachbetter, Patrick Patzig, recognized the need for digital tools in coaching education as early as 2018. During his own UEFA licensed coaching education, he was only able to access limited digital options for training session planning. That was the initial spark for building a fully digital and integrated coaching platform.

Borussia Dortmund stands for excellent coaching education and talent development. The need for digital solutions in football is unbroken. In addition to the BVB eAcademy, our goal is to digitalize especially grassroots football.

In addition to Borussia Dortmund, many other traditional and prestigious clubs are already among the start-up’s customers. In the United States most notably Weston FC, the biggest soccer club in South Florida and part of the MLS NEXT program, with its almost 70 teams.

Shortly after the last seed round, in which coachbetter collected around one million US dollars from well-known partners and investors, the partnership with BVB is the next success story in the still young company history.

The BVB eAcademy is an individually adapted platform from coachbetter, which was built according to the needs of BVB and is now managed as a private label. You can access the complete success story here.

About coachbetter
coachbetter is the only fully digital and integrated football coaching platform and app for associations, clubs and coaches from grassroots to professional level. Our solutions offer complete training sessions and individual activities composed by coaching experts, a team management and data section as well as a high-quality knowledge pool. On top of that, we also offer a video analysis section, where coaches can simply upload videos and tag individual players to improve their game. All can be shared with the individual players in the app.

The BVB Evonik Football Academy provides a fantastic opportunity for all football-mad children and teenagers to experience football at its purest and have fun in training courses, where BVB coaches will show the kids everything that stars like Marco Reus and Youssoufa Moukoko learnt in their youth.

The training is based on the sporting concept of the BVB Youth Department, a concept that is used to consistently improve the footballing performance of all participants. In addition to football-specific content such as dribbling, tricks, shooting, etc., BVB coaches also convey the fun side of football.