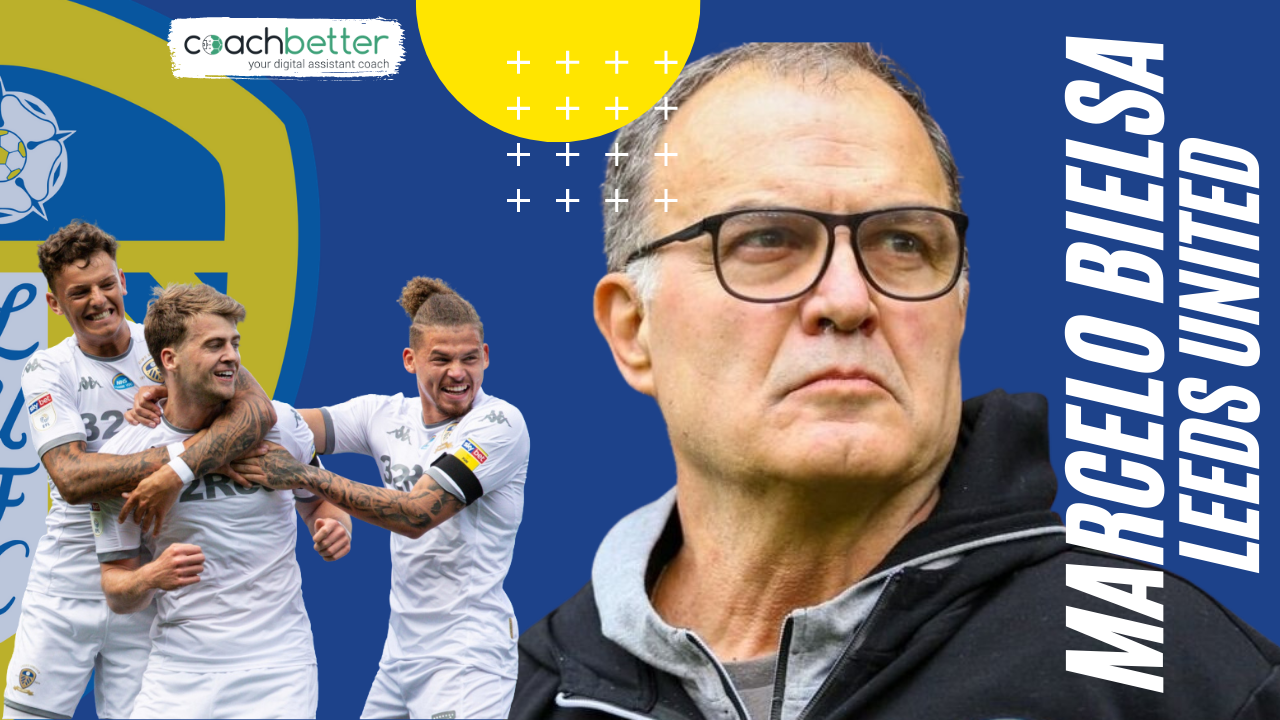 In the midst of a very strange week for the football world, Marcelo Bielsa reacted to the announcement of a newly “Superleague” created stating that the “logic that prevails in the world is that the rich are richer at the cost of the weak being poorer.”

Far from presenting himself as the Robin Hood of the poorer teams, Bielsa has however got us used to believe in a better football world. Indeed, Bielsa still represents the essence of what football and a football coach should be about: Football. Simply.

“El loco” as he is called, brings a romantic touch to our beloved sport. Far often, philosophy is nothing without success, and that is the reason why Marcelo Bielsa’s way of training should be highlighted and analyzed.

What are Bielsa’s secrets? Analysis by coachbetter!

Versatility in Players and Formations:

The strength of Marcelo Bielsa lies in his players’ ability to shift from one system to the other.

It is quite simple, Bielsa plays a very tight and strict 4-1-4-1 defensively while he leaves space and creativity for his players offensively with a 3-3-1-3.

There are key players and key protagonists in both phases of the game. Defensively, you need a defensive midfielder (Kalvin Philips) able to understand the game well and to cover the spaces occupied by the offensive midfielders of the opponent. His position and role is fundamental for the defensive shape of the team. He’s been so successful this season that he even recently got called up for National duty to represent the colours of the Three Lions.

Defensively, you also need a striker that is ready to go above and beyond for you.

That’s when Patrick Bamford comes in.

Playing as a lone striker is often difficult. You need to close the pass between the two opposing center backs, run back to cover the defensive midfielder when out of possession, and you are still required to score goals.

While highly under-estimated and probably not the most elegant striker in the Premier League, Patrick Bamford’s numbers speak for himself. He scored already 14 times for 7 assists in 32 games. Stating that he is in the best shape of his career would be an understatement. Most importantly he scores for Leeds every two games.

Who is responsible for Bamford’s performances? You guessed it: Marcelo Bielsa.

“He has developed all of us tactically… The work we put in the training ground is like nowhere else I have been. He gave me pride to wear that number “9” shirt and I have a lot to thank him for”.

It is no secret that Marcelo Bielsa’s philosophy is very offensive-minded. We can easily just look at the numbers. Leeds currently ranks 7th in the teams with the most goals scored in the Premier League. They are tied with Chelsea but in front of teams like Arsenal and Everton.

However, one of the downsides of this very offensive-minded football is that it leaves gaps in Bielsa’s defense. They are the 6th worst team with 50 goals conceded, as many as they have scored.

Therefore, the question comes back a lot: Shouldn’t you change your system to be more effective, to win more? To what Bielsa answered back in 2020.

“I take risks so the game can be beautiful. Taking another option would mean I don’t care and that I will only go whichever way makes it possible to win.”

That is the reason why he is so respected throughout the football world. It often is easy to pick the path that will give you the most success. Sometimes, it means playing dirty, denying any identity lured by what would a victory mean.

Bielsa is against that. He would rather find ways to improve his own system and philosophy. He takes his responsibilities as a coach and does not hesitate to point fingers at him in case of bad performances.

The secret lies in the outside backs:

Similar to what Pep Guardiola has shown us in recent years, Marcelo Bielsa likes to bring his outside backs inside to create disorder in the opponent’s side.

To understand that the outside backs are the most important players, we can look at Luke Ayling’s stats. He is the second Premier League player with the most touches on the ball with 2884 touches so far. Not bad for his first year in the Premier League.

Another example is obviously the fact that Bielsa plays with Alioski as left-back. He is a very versatile player that played at several different positions throughout his career in Switzerland (FC Lugano, Young Boys, and Schaffhausen).

Having attacking-minded players in these positions will guarantee you that they will feel comfortable bringing presence to the offense.

By placing Kalvin Philips in the middle of the center backs, as the first pass of the build-up process, you ensure quality and safety while in possession. Then, it gives freedom for the wingers to use the whole width and for the full-backs to come inside, and create confusion.

Overload the center to isolate the wingers:

Make no mistake. The fact that Marcelo Bielsa overloads the center with Dallas, Ayling, Alioski, and other midfielders, is just a lure to attract the opposition inside to free some space up for their wingers.

The proof of that is that Leeds stands as the second most crossing team in the Premier League with 666 crosses, right behind Liverpool (the reference in terms of using their outside backs).

That is what has been working for them, Raphinha, Harrison, and Helder Costa are very talented players and they must be given space to create and bring dangerous situations to players like Bamford to finish their plays.

The best example up to now in the Premier League has been their successful 5-0 game won against West Brom. Outside backs high on the pitch, spaces created for wingers, crosses, and a well-applied pressure. A very satisfying result in the content for Bielsa and Co.

The requirements are very high:

What has been the problem of Marcelo Bielsa these past years is that he gets good results with a team but does not last more than 2-3 years.

Marcelo Bielsa is a very hard-working coach, he analyses everything. While coaching Athletic Bilbao, he came across Guardiola and told him everything he knew about his FC Barcelona after watching all their league and pre-season games. Guardiola said jokingly that Bielsa knew more about his team than himself!

The point is that Bielsa works hard and sets the same standards for his players. The physical requirements are very tough on a player and is difficult to hold them for 90 minutes and during a whole season.

This philosophy and system of play can be hard to sustain but has proved itself successful.

In a recent interview to skysport, Bielsa discusses how he wants to “honor the game” through his coaching.

The fact is, in a football that becomes more and more stereotyped, Bielsa’s out-of-the-box thinking brings a new fresh air to the Premier League and football in general.

It is true that all is working for Leeds United at the moment, with very convincing results against Man. City and Liverpool, but how long will it last? I don’t know, we don’t know but one thing is for sure… We will enjoy it while it lasts.