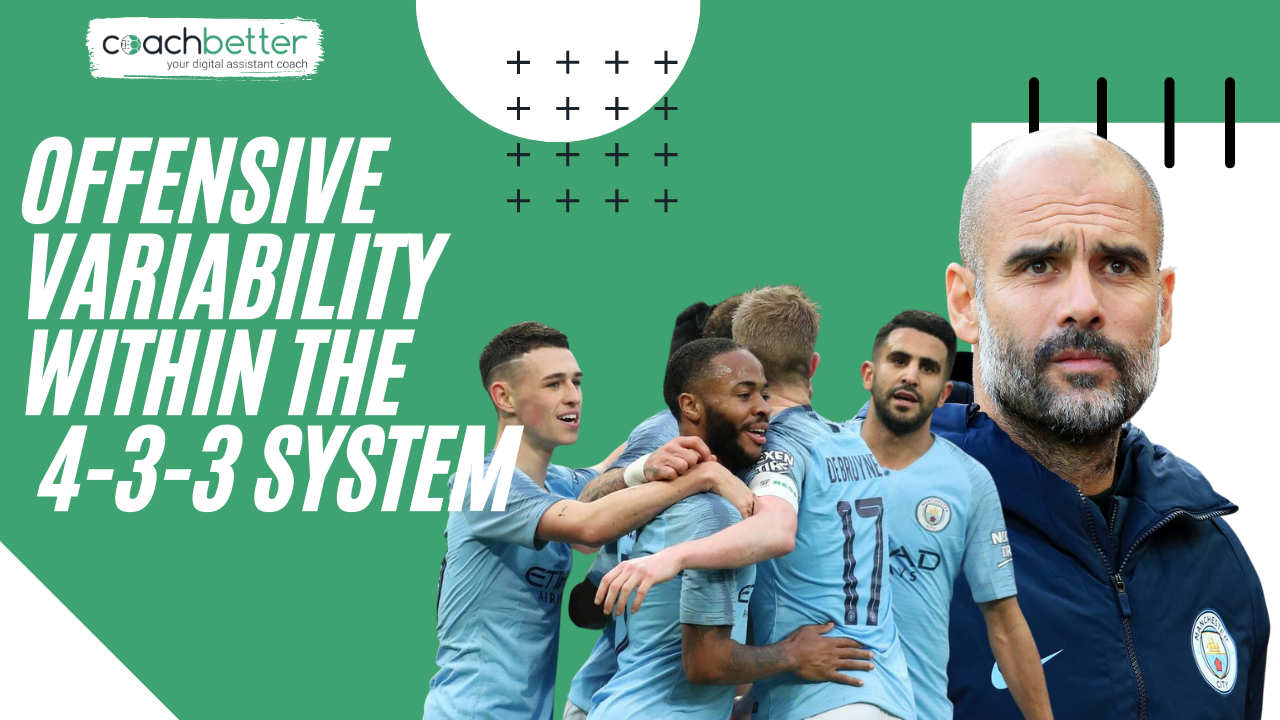 Offensive Variability with the 4-3-3 System

The 4-3-3 system of play is used by many professional teams in the Champions League and is probably the most commonly used formation at this time. Among others, Borussia Dortmund, Bayern Munich, Real Madrid, Manchester City, and PSG often use this system of play.

This formation is divided neatly between in width and depth. Behind the forward line of three, which can cover the whole width of the pitch, is another row of three in midfield, that can focus on the center in positions of variable depth. Finally, the fullbacks in the back four ensure along with the wingers that the wings are well-covered.

This formation allows for several types of pressing and variations in the defense, although it is slightly more offense oriented. The three forwards can effectively disrupt the opposing team as they try to build up from the back, for example by putting pressure on the opposing fullbacks in possession, with direct, one-on-one focused pressing.

When using controlled pressing in midfield, one effective variation is to steer the opponent’s build-up play towards the center. This means blocking or isolating the opposing fullbacks through the wingers, so that a center back is most likely to pass towards the middle. From here, the three midfielders (occasionally supported by a striker) can gain control of the ball.

Another possibility is even to let one of the fullbacks play far up the pitch in order to squeeze the space between midfield and the opposing defense, as the other three defenders move towards the center. In doing so, this variation makes good use of the strength in the center of the pitch.

Yet another possibility, although highly dependent on the quality of the fullback, is to offer up one side of the pitch, in order to let the opposition play out wide.

If the fullback can then get and stay close to his/her opponent, it makes it difficult for the opposing player to be able to turn towards the center and hampers any hopes of launching a successful attack. If another midfielder moves towards the wing, he/she can also assist the fullback there.

If the forward line doesn’t play too wide when attacking and their teammates behind them constantly constrict the spaces there, it creates a great opportunity to press the opposition This requires the midfielders and fullbacks (or at least the one nearest to the ball) to play high up the pitch.

The offense in 4-3-3 has a lot of variety in terms of options, as it is possible to play through the center or via the wings, were both fullbacks and wide midfielders are deployed. A lot of top teams depend on their wingers to create and use promising one-on-one situations against opposing defenders successfully.

Since the forwards are often quite high up the pitch, the back four and midfielders bear the brunt of building up from the back. This requires great individual players in midfield, who work well together as a trio. They must be capable of switching positions in an instant, to bring movement into the game and ensure that they can constantly provide openings in the center for the back four.

One variation in build-up play, is for one of the midfielders to move to a wider position, while a fullback moves higher up along the wing. The winger then makes space for the fullback by moving towards the center.

This creates new possibilities for combination play: space for the fullback on the wing and an open man for the center backs in the -newly created space, without having to make a long and/or pass. This interplay – fullback moving forward, winger moving back into a half-space – is a typical variation of 4-3-3 that is based on large distances that lead to free spaces, if the opposition doesn’t defend with a compact defensive setup.

In this example we can see the midfielder in possession is creating a space for the full back alone alongside the winger tucked inside.

In order to use 4-3-3 effectively, you need “real” wingers. In Germany, for example, there is currently a lack of such players, with merely Leroy Sané and Gnabry who stand out from the rest. These two possess extraordinary technical skills and are therefore able to keep the ball under control at an incredible speed, come out on top in one-on-one situations, and have great timing when running deep.

Internationally there are many world-class players in this position, for instance: Angel Di Maria, Kylian Mbappé, Neymar, Cristiano Ronaldo, Mohamed Salah and arguably the best player of all-time, Lionel Messi. All these players distinguish themselves through their perfect ball control at high speed and in small spaces. On top of this, they are all able to prevail when dribbling against one or more opponents and have an incredible feel for square or back passes, which is why they are responsible for not only many of their own goals but a large amount of assists as well.

If a coach opts for an offensive 4-3-3 formation, it’s more about the individual strengths of the forwards than the prominence of team play. This doesn’t mean, however, that the forwards don’t take on tactical tasks as well.

In order to be able to use your offense and wingers well, you must have an extremely well-organized central midfield. Besides creating stability in build-up play, the attacking midfielder(s) should also be able to support the wingers between positions, so they’re not isolated on the wing.

An example of this kind of strong midfield can be seen in Liverpool with Henderson, Wijnaldum, Milner and or Fabinho. Each of these players are capable of supporting the forward line at any time with intelligent positional play and well-timed runs, which can be both deep and wide.

With the right personnel it’s possible to be extremely dangerous on the flanks, which is aided by the harmonious distribution of space in the first and last rows. Working outward from the compact center, the offense can take over, either with deep passes or precise footwork, the latter of which often leads to dribbling or one-on-one situations out wide (e.g. Mbappe).

The space in between wingers and fullbacks can be problematic in the defense. A flaw in 4-3-3 can especially be felt when the opponent uses fast transitional play. This can be remedied by a focused transition of the wingers and possible early movement of the fullbacks. Or, a coach can risk this space being filled by a midfielder, although it pulls apart and weakens the center.

On the other hand, this system of play allows for domination in the center. With the use of three forwards, the opposition normally can’t condense the space in midfield as much as is necessary, without then subsequently exposing their defense. This formation is well-suited if you want to dominate in the offense and out-play the opponent. Because of the staggered arrangement of players both wide and deep, this formation is especially good for possession play, provided the players are technically sufficient.

If a position on the wing is filled by a player who operates more defensively, a certain asymmetrical mix of 4-3-3 and 4-2-3-1 is formed. An asymmetrical formation can also therefore occur when one side operates more offensively than the other. In order to use this to your advantage as a coach, it’s possible to lure the opponent onto a certain side of the pitch (steering the opponent’s build-up). If the wingers line up with the midfielders, you’re left with a 4-1-4-1 formation, which provides additional stability in the defense.

In order to operate even more offensively, a coach can move up the fullbacks to create a 3-3-4-like formation. In extreme situations, the team can even attack in 2-4-4 – a perfect example being Barcelona under Pep Guardiola in 2009. Against opponents who are spread out deep down the pitch and playing with one counter-attacker, if at all, this is a way to create extreme pressure and great counter-pressing positions.

Within this system of play, the interaction in midfield and transition to the central striker can be trained to great effect. Here the focus is on the point of intersection in the opposing defense, which requires the wingers to move further forward. Another aspect of the game in midfield is the support of the forwards through the central midfielder in tight spaces and runs from deep.

Playing wide with quick transitional play can also be developed in training, as normally both wings are occupied and can achieve a fast switch through the center. This happens situationally through the involvement of the fullbacks. Building on that, it is then possible to work on one-on-one situations of the forwards or fullbacks who have progressed up the pitch in order to improve their offensive teamwork on the wings.

Another emphasis in training should be on building up from the back. The basic formation in 4-3-3 allows for training the movement of wingers into tighter spaces, where they are then open for skilled passes from the center backs. In addition, transitional play on the wings through coordinated running can also be trained.

If you want to focus on group tactics, it’s useful to practice a defensive midfielder’s dropping deep into the minimal space found between center backs and fullbacks, which should then be combined with subsequent plays.