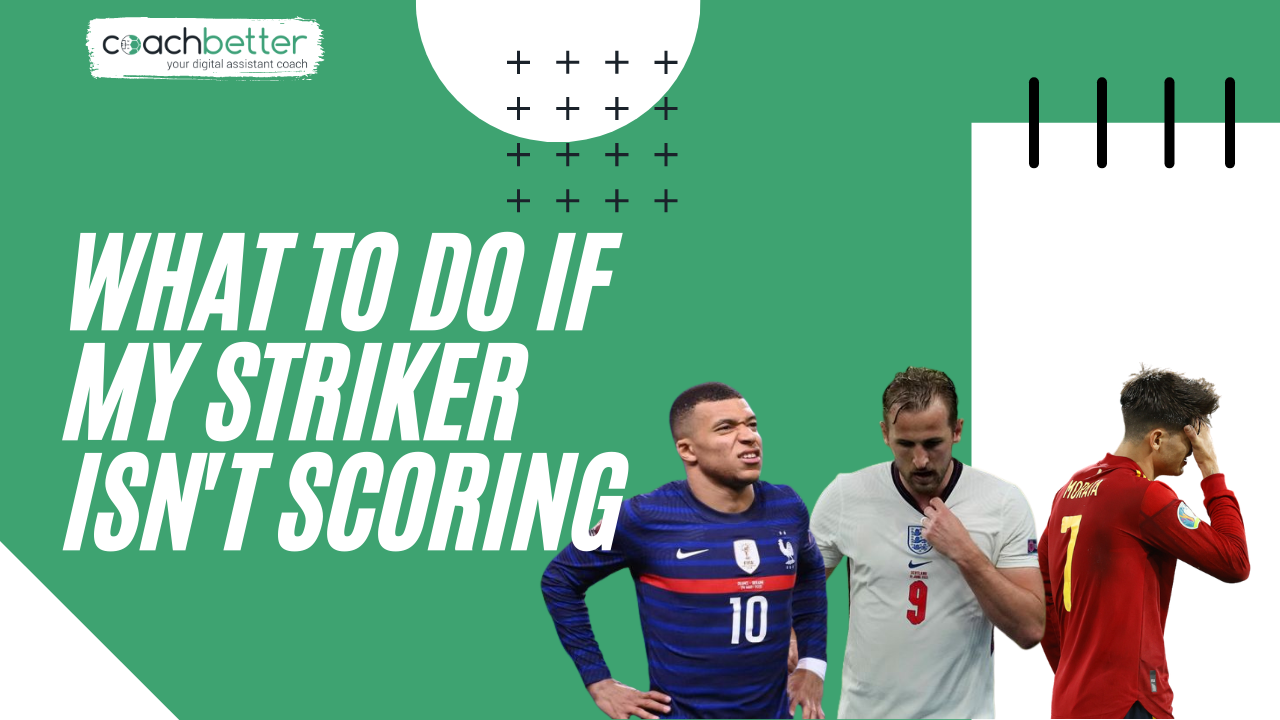 Different Types of Strikers - What if my striker isn't scoring?

What’s important is that a striker’s style fits well with his/her team. For coaches, it’s important to react in the right way when a striker who has been successful in the past suddenly stops scoring. This is a situation that happens at every stage of the football pyramid from the grassroots level to the professionals.

During the European Cup, we have seen many strikers such as Harry Kane, Kylian Mbappe, Haris Seferovic, and especially Alvaro Morata being harshly criticized as they are not finding the nets. It is a difficult situation to handle at the highest stage where there is so much pressure but how should a coach approach the situation? Article by coachbetter, your digital assistant coach!

What do I do if my striker isn’t scoring?

With 10 shots, 6 being on target for one goal, Morata is living a difficult time during this EURO. Nevertheless, his coach Luis Enrique hasn’t stopped supporting him, with three starts so far in the tournament and urging fans to follow him as well.

Morata is not alone in this situation, we have seen players like Harry Kane, Haris Seferovic, and Kylan Mbappe (to another degree) facing similar criticism.

Scoring goals is probably the most difficult task to do in football and that is the reason why goal scorers are often the most expensive players on the transfer market. It is what decides the outcome of a game, and strikers have a very specific job to do: score goals.

When it does not happen, it can be very hard on them and it can consume them mentally. Morata claimed that he came close to being severely depressed while playing for Chelsea. This is why it is so important for a coach to approach your striker very diligently when he is not scoring.

The first thing you must do when a striker isn’t scoring anymore is to analyze whether it is having a negative impact on your game and the team. A striker can score fewer or no goals without automatically meaning that he/she is no longer contributing to the team.

A coach should pay attention to whether the team’s game has possibly taken on another focus: has the striker become a distributor or taken on a larger role in terms of combination play? Does he/she move to the wing more often to get out of the opposing center’s backline of sight? That, too, can have a positive outcome on the game, even if it means a negative impact on the player’s scoring record.

Is it really the case that the striker scores fewer goals with a similar amount of chances for shots on goal?

As a coach, you can’t let yourself be fooled by subjective assessments of the situation, instead, you can rely on facts and data. If it really is a personal problem with the player, the coach should try to speak to him/her.

It’s important to show your support and not to put the player under additional pressure (which a player in this situation is probably doing enough on his/her own).

Ideally, you can look at video sequences together to analyze what the cause could be for why he/she isn’t scoring as frequently as before. Is it about the runs that they are making, timing, decisions that are made too quickly or too slowly, or is the wrong finishing technique being used? If you have found a presumable reason for the issue, you can begin to work whatever situation it is in training, so the player has a chance to work on it.

This is usually done with small-sided games at a competitive level so that the pressure through time and the opponent are paired with the competitive intensity.

In addition to this, it’s important to strengthen the player’s confidence. To do so, a sports psychologist with targeted exercises and relevant techniques can be a great help. Of course, depending on your position in the league, you also don’t have to keep selecting a striker who is out of form. It’s important though to give the player some time so that they are able to get out of the crisis, even if it’ means a stint in the reserve team or to the bench.

Poacher: “Poachers” are the strikers that are rarely involved in build-up and combination play, but instead are only active in the last phases of attacks (in the penalty area). These players are often talented when it comes to playing in tight, situations in front of the opponent’s goal and are good at utilizing cross-field balls and crosses from a short distance. They can accomplish this not just with their feet, but also with any other part of the body if need be. Perfect examples of poachers are Miroslav Klose (no longer active, World Cup top scorer 2006), Edinson Cavani (Manchester United/Uruguay), and Luis Suarez (Atlético Madrid/Uruguay).

All-rounder: These strikers can do it all, but don’t have any special trait. These players must have the ability to adapt to diverse systems of play within their teams. Additionally, they can be easily combined with other types of strikers, which gives the coach great tactical flexibility. Good examples of these kinds of strikers are Robert Lewandowski (Bayern Munich/Poland) and Karim Benzema (Real Madrid/France). These two can play in the center, on the wing, alone, as an attacking midfielder, or as a combination striker.

Complete striker: A “complete striker” is a striker that is often isolated as a central striker and therefore must operate alone a lot of the time. These players usually have a large physical presence, which they need in order to trap the ball while running and to win in a one-on-one situation until their teammates can advance further up the pitch. They are also great in aerial duels. Complete strikers can be found in systems of play with just one striker, such as 4-1-4-1 and 4-3-2-1. They are rarely involved in the defense and the rest of the game. Strikers in this category include Didier Drogba (During his time at Chelsea), Romelu Lukaku (Inter Milan/Belgium), and Harry Kane (Tottenham/England).

Combination/playing striker: This type of striker can also be looked at from a slightly different perspective, and therefore could be considered as an extremely offensive midfielder. These players are integral in their teams’ combination play and are able to receive passes, even when finding themselves in tight situations. If this kind of player gets the ball, he/she has the ability to make key passes, while also able to shift play to the other side of the pitch. Because of this, a combination striker can be so important, when his/her team finds themselves in attacking phases of play. If the game is switched into the opposition’s box, this player will usually head for the goal at full speed to finish. Additionally, this kind of player has the chance as an attacking midfielder to finish from deeper positions. These players use the whole width of the pitch and regularly take over the ball in midfield. Roberto Firmino (Liverpool/Brazil), Antoine Griezmann (Barcelona/France), and Lorenzo Insigne (Napoli/Italy) all exemplify this kind of striker.

Winger: They provide the necessary width for their teams by operating on the wings: wingers are usually fast players who are strong dribblers and have great one-on-one skills. These players often set up dangerous scoring opportunities by crossing or passing from out wide. They often become dangerous in front of the goal themselves by running towards the center parallel to the penalty area and then applying a finish from that position. Many coaches have these players play on the “wrong” side of the pitch, meaning a right-footed player on the left side and vice versa, in an inside forward role. This creates additional scoring opportunities since a winger can finish with his/her dominant foot when moving in towards the center along the penalty area. Playing on the wing requires great technical skills and incredible speed, which are the only way wingers keep control of the ball in tight spaces and therefore have the ability to come out on top in one-on-one situations. A classic formation that includes strong wingers is 4-3-3. The most famous players in this category are Lionel Messi (Barcelona/Argentina), Kylian Mbappe (PSG/France), and Mohamed Salah (Liverpool/Egypt).

Target player: A “target player” has only slightly different characteristics than that of a winger. Besides the typical speed in this position, they also support the team’s defense. When the team gains possession, this kind of striker transitions extremely quickly and manages to create dangerous situations with and without the ball through long runs. It’s helpful in this case when the opponent has advanced further up the pitch. The critical strength of this kind of player is the mental and physical endurance they have in long runs and sprints throughout the course of a match. They also benefit from extreme tactical intelligence and the ability to anticipate: they sense if it is worth attacking an opposing player because he/she will lose the ball and have great timing when running behind the opposing defense. Famous target men are, Timo Werner (Chelsea/Germany), Romelu Lukaku (Inter Milan/Belgium), and Jamie Vardy (Leicester City/England).