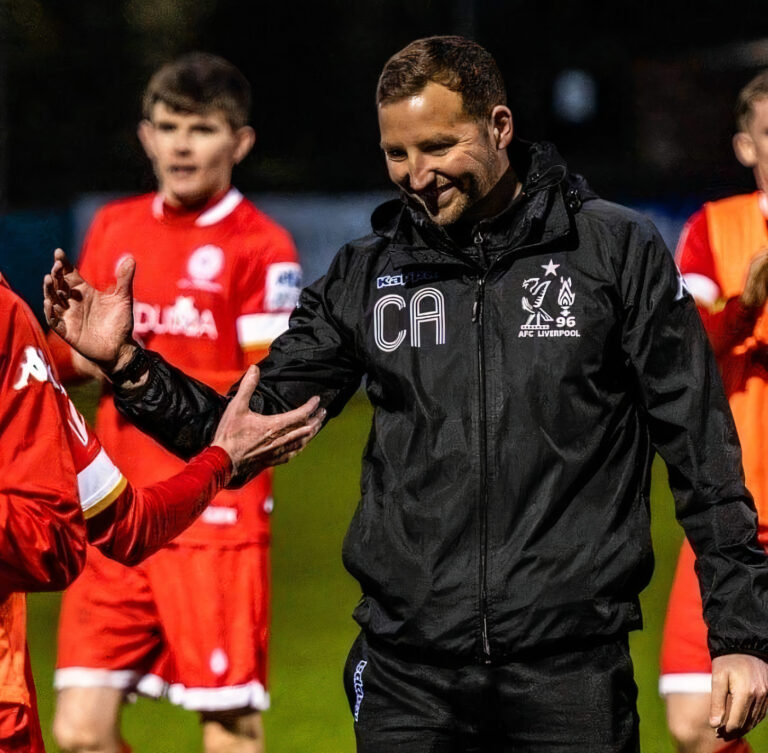 This week, we are happy to introduce Chris Anderson, Head Coach of AFC Liverpool, member of the North West Counties League. The 32-year-old is an UEFA B licensed coach, who enjoys to develop his players, on and off the field, with his passion for football and experiences he gained as a player. During our interview, Chris told us how coachbetter helps him daily and how he experienced the magic of the FA cup.

Anderson: The team always comes first. I believe it is important to give my players the freedom to express themselves on the field and incorporate their individual strengths into the team formation.

Tactically, I like to play fast attacking football with a fast flow from the middle to the final third, in the best case even entertaining for the audience, my players and myself.

My preferred formation is 4-2-3-1, with a solid defense and freedom of creativity for my four guys up front. Especially in England it is also important to consider the impact of physicality, which is embedded in my philosophy.

CB: Why do you use coachbetter?

Anderson: Coachbetter offers many great features (create training sessions with the “shopping cart” option) but I mainly use coachbetter for collecting and analyzing data of my players to gain valuable insights.

Before using coachbetter, I organized my data with an Excel spreadsheet but now I feel more organized and I see data in a different light.

Anderson: My favorite drill that I always try to include in my training sessions is the “Ajax I Passing Drill”. The drill is about simple passing but really gets the flow going and prepares my players for intense training sessions.

Anderson: Cristiano Ronaldo. He as everything, he is the complete package, a role model of an athlete. He constantly strives to improve and develop; I believe this is also something that can inspire any coach. His attitude reminds me of Steven Gerrard – “obsessed to be the best”.

Anderson: I could name so many. In general, I try to take a bit from every coach that inspires me and to that, I add my personal skills. For example, I admire Sir Alex Furguson and how he changed the mentality of Manchester United, I love Pep Guardiola’s “new school” coaching and also really important to me is the personal relationship between the coach and his players and Jürgen Klopp is a great example how to master this task.

Anderson: I have only been a manager for two years since retiring from playing, however, managing my team playing in the 2019 FA Cup is an unforgettable experience. Also, as a player, when I am thinking back playing in the FA Cup in 2013 and 2017, I still get goosebumps.

Anderson: Football for me is about passion and emotions. I totally understand and really value the technical and digital opportunities that we can use to improve the game, like stats, digital training planning and communication. However, I wish that we don’t let technology dictate the future of football. I see the risk that installments like the VAR take the emotions away by at the same time not being free from errors and discussions as it was prior to the VAR.